CALL ON HOTEL FOR RESERVATION

We save you money over the luxurious hotels near SFO that charge you for every little thing extra. Whether you’re looking for San Francisco Airport Hotels CA travelers can rely on or San Bruno CA hotels near the local attractions, we’re here for you at Ritz Inn. Plus, we’re just a quick 20 minutes from downtown San Francisco and easy to locate from Hwy. 101 and I-280. You simply won’t find a more convenient property for a lower price. While in the area, visit San Francisco attractions like the Golden Gate Bridge, China Town, Fisherman’s Wharf and so much more that you’ll enjoy.

San Francisco is one of the world's most popular international destinations, and part of what makes America special. Famous for its beautiful scenery and landmarks including famous landmarks, San Francisco has once again been voted the #1 city to visit in the United States. Start here to explore San Francisco and the Bay Area. Whether this is your first trip to San Francisco, local to the Bay Area, or are returning for another visit, there is always something new to do and see...or see again!

Walking Tours are one of the best ways to explore San Francisco Chinatown. Visit fun attractions such as the Fortune Cookie Factory, Chinatown Alleys, Chinatown Gateway, Portsmouth Square, and much more. Not only can you see the sights and sounds of Chinatown, but you can also enjoy a culinary adventure. Enjoy great lunches or dinners in the Chinese community as you tour Chinatown in the day or at night. With numerous restaurant options, you can't go wrong. Here's a few selected San Francisco Chinatown tours.

The Cable Car Powerhouse & Museum, 1201 Mason Street at Washington, is the working center of the cable-car system. The onsite museum features displays telling the history of the system. The gift shop offers a variety of souvenirs. The Powerhouse is open free to the public daily 10am-6pm. Powell-Hyde and Powell-Mason lines stop at the museum. On the California line get off at Mason Street and walk blocks north.

The north end of Columbus Avenue marks the beginning of historic Fisherman’s Wharf. The history of this area dates back to the Gold Rush era when Chinese immigrants in “junks” fished offshore to supply hungry hordes with shrimp, oysters, and salmon.
Later, Italian fishermen followed, setting up family stands along the beach, selling crab and other seafood delicacies.

Discover the incredible world that lies beneath the waves of the San Francisco Bay as you walk through 300 feet of crystal clear tunnels filled with 20,000 amazing marine animals, including Sevengill Sharks, the Bay’s largest predators. Touch Leopard Sharks, bat rays and tide pool animals. Explore the lair of the Giant Pacific Octopus. Visit the mesmerizing world of Moon Jellies and Sea Nettles.

Ghirardelli Square is located at 900 North Point Street at the corner of Beach and Larkin Streets.
It is on the West side of Fisherman's Wharf, two blocks east of Van Ness Avenue and one block west of the Cable Car turnaround at Beach and Hyde Streets.

Golden Gate Bridge opened in 1937 and connects San Francisco to Marin County (Hwy 101). The distinctive rust-colored towers and graceful cables of the Bridge make this famous symbol of San Francisco the most photographed bridge in the world. It is visible from many high points in the city, although it is often shrouded in fog. Spanning the 2 mile mouth of the bay, it is built to withstand winds of over 100 mph. The color ³International Orange,² was chosen as a complement to surrounding scenery. 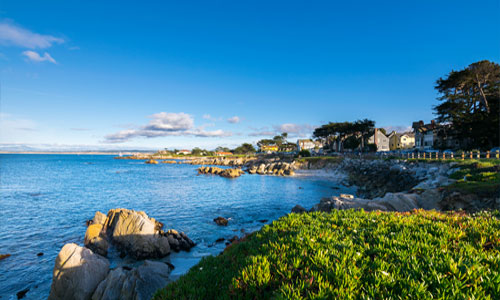 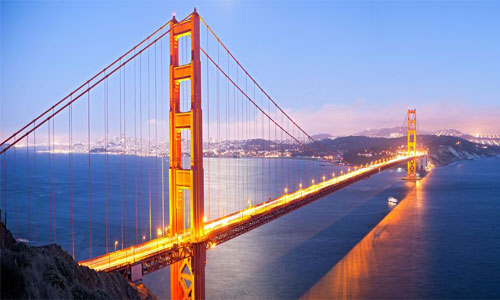 2) The Shops at Tanforan